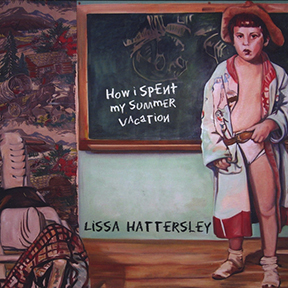 How I Spent My Summer Vacation

The Making of the CD

First of all, a disclaimer:
I'm the bass player on this album. I’m a lucky guy -- I got to play great songs by songwriters that you may not have heard of, record with an amazing assortment of players you may not know about (unless you're an Austinite, in which case you're reading the liner notes and thinking, wow whatta band) -- and luckiest of all, I got to be a part of Lissa Hattersley's first record as a solo artist!

Lissa Hattersley is from upstate New York, a little town called Canandaigua near Rochester. She's spent most of her life in Austin, Texas and New York City. The way I get it, she wound up in Austin after her brother Cleve got here, but I'm never clear on what exactly he told her that convinced her to head south. But she did, and became an important part of the odd story of how Austin, Texas became one of the world's musical capitals. When she got to Austin in the early 70s, Lissa, Cleve and wondrous violinist Sweet Mary (and a revolving cast of sidemen and co-conspirators) formed a band called Greezy Wheels. In those heady days, Austin was already distinguished, if that's the right word, as one of the nation's counter-cultural centers. The real nexus of the thing was probably Hippie Hollow, but the enduring symbol was the Armadillo World Headquarters. I won't go into a history lesson now—besides, you can follow the hyperlinks—I mention this by way of telling you Lissa was the vocalist and mandolinist in Greezy Wheels, essentially the Armadillo House Band.

Things just come together like that sometimes: a movement, a band, a place to play. By the time I got here in the late seventies, Austin had been permanently altered by a small but incredibly potent group of musicians, artists, and club owners. For me, a young bassist from the wilds of Denton TX, the idea of playing with Lissa or Greezy Wheels was impossibly remote. Greezy Wheels was one of the very first Austin bands to sign with a BIG LABEL (London Records), they toured, they held court at Soap Creek and the Armadillo (shoot, they opened for Bruce Springsteen on his first stop in Austin!), they appeared on Austin City Limits—they were the real deal.

The season changed, and with it, Austin, though forever altered, changed, too: the Armadillo became a parking lot, dem ole Greezy Wheels quit turning for a time, and Lissa moved back to NYC.

There she lived, and played, and worked, and made art, and as usual attracted top players to her side for her always too-few gigs. Lissa is that kind of musician: players want to play with her, not because it's steady or cush or remunerative, but because she's a player, too.

The season changed again, and Lissa came back to Austin, continuing a life of friends and work and art, always making room for her beautiful singing.

Wheels are meant to turn—in time, and from adversity, Greezy Wheels returned, that same family core intact, but with a whole new cast of regulars, including me this time, in the honored bass chair, backing up Lissa's fantastic singing, so particular, so intimate.

Playing bass behind Lissa Hattersley gives me that feeling that brought me to the service of music in the first place. When musicians say this about a singer, it's meant as the highest compliment: it's like playing with a horn player, man. What that means is she hears the chords, she knows the notes, she feels the time, and she gets the difference between hip and ouch.

The seasons went by in their slow and majestic Texas pace, and eventually, Lissa told me she wanted to make a record of her own. I immediately offered my services as janitor or brass polisher at the sessions, but, unaccountably, she wanted me to actually play some bass. She began bouncing ideas for the record off of me, and I watched as she began the always amazing process of creating an album from thin air.

And what an album it is!

I keep calling How I Spent my Summer Vacation a record or an album–and I mean it in the old-school sense of those words: a document conceived and crafted, best taken not just as a collection of songs, but rather a careful collection of compositions, players, and circumstances, all guided with a storyteller's intent.

Right out the gate there's trouble: Lissa’s brother, Cleve Hattersley, weighs in with his biting and rueful "Love is a Crime Scene"

"A crime has been committed here/I know the victim's name/it's meeee..."

And then, in Tony Airoldi's wonderful "Talking in Your Sleep", we meet a couple that isn't communicating very well—at least not while they're awake.

Lissa gives us a little break with her own "Easy Reverie," a gorgeous and impressionistic song that comes to us "on the tail of a moonbeam..."

It's a good thing she did, too, because now we careen from infatuation (Marc Black's "Moonstruck Love", a perfect deer-in-the-headlights-I'm-in-love R&B pop song) to closing time and not quite enough alcohol in Lissa's own hilarious and funky "There's No Fool."

I first heard the great and under-appreciated standard "Shake Down the Stars," lovingly treated by Sarah Vaughan, and I was struck by both the desperate loneliness of the lyrics and the lush beauty of the composition. Lissa's delicately aching version features great solo turns by violinist Sweet Mary Hattersley and guitar great Chris Duarte.

From desperate to defiant, Harvey "Tex" Thomas Young writes to that part of every musician that's wild and free (and maybe even a little bit mean) and gets it exactly right: there's a "Fugitive Animal" in every single one of us... and it's true, we do take a certain pride in it.

But sometimes even the wild ones get adopted, and Ned Sublette's beautiful "Nightworker's Song (Blue Time)," is a lovely tribute to small and lasting pleasures.

Next up is another song from Cleve Hattersley, this one from the early Greezy Wheels songlist. "Peace in the Valley" offers a quiet and gentle vision, a sort of promise of heaven.

When we return to earth for the closing tune, "Whatever Way You Want It" (penned by the late and lamented Dan Del Santo), we get The Professor's ode to cheerful and earthy acceptance, and we realize we've been on a journey–a quite memorable one.

The musicians on this record -- well, there are highlights everywhere, but just off the top of my head I'd direct you to the dreamily intertwined horns on "Talking in Your Sleep" and listen to Frosty's drumming, a sly and knowing percussive Greek Chorus throughout -- startling, splendid work. For that matter, check out Paul Pearcy's groove on "There's No Fool" -- that's New York funk, Texas style, at once relaxed and precise -- there's no teaching that; it's a DNA thing.

Or check out the 4 bars of trombone madness from Jon Blondell on "Crime Scene"! -- or dig John Mills, featured throughout, delivering one great, stirring solo after another, as well as contributing all sorts of cool little ensemble touches. Mills is a miracle, and not just a minor one, either.

Chris Gage not only co-produced, engineered, and mixed the record, but evidence of his stunning musicianship can be found everywhere -- piano, guitar (check out his scary dog guitar on "Fugitive", or his perfect piano dialog with Lissa in "Reverie" -- that's the same musician! Great player, and a joy to work with.

Lissa would be the first to tell you that if How I Spent my Summer Vacation is a killer record, it's because of everybody's contribution, and that's true enough, I suppose. But I was there from its first little glimmer, and I can tell you: this is Lissa's record, through and through. The songs weren't yet chosen, and she had little or no idea how, when, or with whom, but what she described to me in the beginning is what you are holding now: a record of songs by writers she loves and wants to honor, played by players she loves playing with—or knew she would love playing with if she could just get up the nerve to call them.

Well, she called, and they came. We played, and at last—at long last—it is my great pleasure and honor to present you with Lissa Hattersley's solo debut.